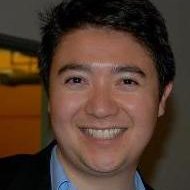 Brendan Wolf is a US composer, jazz pianist, and audio producer born and raised in the San Francisco Bay Area. At age 17, he recorded his first album “The End of the Beginning” and performed with “The Starlighters” Jazz Quintet for several years in Santa Barbara while studying at UCSB. Brendan is currently pursuing a Masters of Fine Arts in Music Production and Sound Design at the Academy of Art University in San Francisco while working with several indie game developers in the Bay Area as a composer and sound designer.

Creating music and sound design, mixing within FMOD, and then implementing the banks into Unity for the Day and Night Game Level (thanks to Steve and Scott) was a very rewarding experience. Learning how to take a linear music and sound concept and re-imagine it for non-linear media using middleware was a truly rewarding experience. I drew inspiration from JRPG classic soundtracks from the late 1990s that I grew up loving to listen to such as Final Fantasy VIII (Balamb Garden) and Zelda: The Ocarina of Time (Kokiri Forest Theme) and composed a two-minute piece using Logic Pro X with the desired instrumentation. The first minute represented the early morning hours using an English Horn, soft legato strings and a harp arpeggio that transitions to a rolling piano to give a sense of movement and alertness into the afternoon. The second minute, representing the afternoon/evening hours then subtly transitions into a more ambient and soothing electronica-inspired sound by using electronic versions of the same instruments used during the day. To ensure for seamless looping play, I carefully edited each instrument track down to intervals of 60 so that each loop on endless repeat would line up precisely no matter how many times it was played within the bank. Once these loops were edited I imported them into FMOD to mix the volume levels with automation according to the parameter of Time (0-24 hours) to ensure that they would be played at the appropriate times and transition smoothly within the game level. Finally, after the music and ambience tracks were properly mixed, I made a Bank which was then imported into the Day and Night game level in Unity.